Each of the cylindrical tankers has the same explosive force as two million sticks of dynamite, says Wheatfield resident John Cunningham.

“If one of these goes off the rails, you evacuate everybody that isn’t dead, and you let it burn for three to four days. There isn’t enough foam in Western New York to put out one car,” he said during Monday’s Town of Wheatfield board meeting.

With a possible blast radius of one mile, Cunningham said, it’s a deadly threat he’s bringing to the attention of the public and their elected officials.

“I may have seen my first bomb train the other day,” said Wheatfield Town Supervisor Robert Cliffe during the meeting. “I was over at Gratwick Park for the Healing Field and I stopped by and saw a train coming through, and it might have had two or three that were unmarked cars,” he said.

Cunningham said cars carrying this highly explosive Bakken crude oil from the fracking operations in North Dakota are designated DOT 111, which can have a minimum thickness of less than a half an inch.

“They are not designed for it,” Cunningham said. “And there are 300,000 – 400,000 of these cars going through United States every day. They are even more dangerous empty. The fumes on the inside of them will go up like grenades. But they are not derailing because they are not as heavy.” 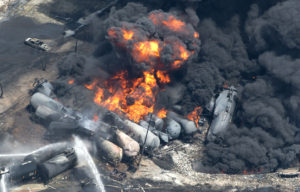 Cunningham told the town board that railroad lines through Western New York were being rebuilt to accommodate the extra-heavy loads.

“Going around curves is where they are mostly derailing,” Cunningham said. “They are limited to 40 mph in Oregon, and it came off along the Columbia River at 26 mph.”

Cunningham said the oil shifts around curves, putting pressure on the outside wheels and causing them to derail.

Cunningham also said there’s a national security aspect to this deadly scenario. Sabotage could see the purposeful derailment of such a “bomb train” to devastating consequences in any of the many heavily populated areas along the Bakken oil’s winding route to Nova Scotia, where it joins the international market, he said.

Two days later, on Wednesday, Cunningham attended the Erie County Local Emergency Planning Committee Public Information Forum in Cheektowaga, right next to the rail lines along Broadway that are bringing Bakken crude oil to this region. 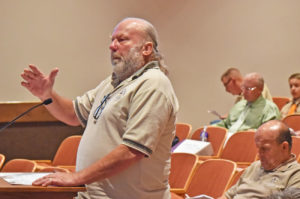 John Cunningham speaks to the Wheatfield town board about the “bomb train” threat coming to Wheatfield, Niagara County and Western New York.

“There’s a lot of bad information out there,” said Erie County Emergency Services Commissioner Daniel Neaverth, Jr. “And you could start with referring them to bomb trains. Because they are not ‘bomb trains.’ They don’t randomly explode as they are rolling down the railroad tracks. It’s a scare tactic.”

He also mentioned that industrial foam used in rail accidents are to protect other rail cars rather than put out the fire.

“Some of us have actually gone to the CSX training facility and not only seen how you deal with these issues but what the real science is behind it,” Neaverth said. “It’s referred to by some people as bomb trains because of the incidents that they’ve been involved with. We go out to Quebec, where we had an incident out in Quebec. The train didn’t just explode. What happened was the train went out of control. Went off the tracks. And then you have a resulting fire. The train doesn’t explode.”

According to the Lac-Mégantic, Quebec, accident summary from the Transportation Safety Board of Canada: “Almost all of the 63 derailed tank cars were damaged, and many had large breaches. About six million litres of petroleum crude oil was quickly released. The fire began almost immediately, and the ensuing blaze and explosions left 47 people dead. Another 2,000 people were forced from their homes, and much of the downtown core was destroyed.”

“We don’t want to focus on one particular product,” Neaverth said. “Because if you stand on either of these railroad tracks here right now there’s a lot of other stuff that’s going by on a minute-by-minute basis that I’m more scared of than the trains that are carrying Bakken oil.”