Wheatfield resident Jason Gielow appeared before the town board Tuesday, urging them to request another DOT traffic study for Shawnee Road from the Boulevard to Wildwing Drive. 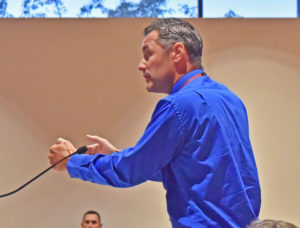 “I wanted to bring to your attention that about a year ago this month I wrote a letter to Senator Robert Ortt, Assemblyman John Ceretto, and Legislator Kathryn Lance — under the direction of Mr. Helwig and Mr. Doucet — to go to them,” said Gielow. “My concern is the speed limit of Shawnee Road, the fact that it’s 55 mph. I live in a cul-de-sac called Knottingwood Drive. And the speed limit there is 50 mph. This is a high-tax paying area and I don’t want to see it forgotten.”

The board later voted unanimously to request new traffic studies for Shawnee Road as well as River Road.

“I have three daughters that will be driving. One will be driving two years from now. And I’m worried about her getting onto Shawnee Road to go to Starpoint High School. In light of the fact that there were two fatalities on Shawnee Road,  I sent this letter to Channl 4 and 7, and Channel 7 had me on the news that day because Assemblyman John Ceretto was the only one that actually replied to the letter.”

“This letter was mailed one year ago and I’d like to read one of the paragraphs, ‘Again I wish to put you on notice for the dangers of the high speeds as a fatality is certain to happen.’ As Mr. Helwig suggested, I put them on notice. One of them responded with a letter, a curtesy, saying that he will wrote a letter to the DOT. The other two ignored it, which is why Channel 7 came to my house. Channel Four asked me for an interview.”

“And I know that you, my councilmen, my elected officials, are steering in the right direction. So I don’t throw people under the bus. But the people who didn’t reply to my letter, I’m a little perturbed. Like for example, Kathryn Lance and Robert Ort. They have phoned me back since, but only John Ceretto sent a letter to the DOT. And he asked them because they do a traffic study every three years and they’ve done one saying that the traffic flows at 55 mph so there’s no need to slow it down. That’s what the response was from them. He asked them to do the study again because it was only one year old and it’s going to have to be sped up. So at least John Ceretto is doing something to make this happen.”

“But I was informed that your board could request that the town could go to the County of Niagara to do a TR9 form to NYS DOT for a recommendation for the speed limit being lowered. I feel 45 at most would be safe. During rush hour you cannot pull out of these cut-de-sacs onto Shawnee Road when there are 55-mph car coming down — let alone when there’s inclement weather. And my daughter is are trying to go to school. I want to protect her when this time comes.” 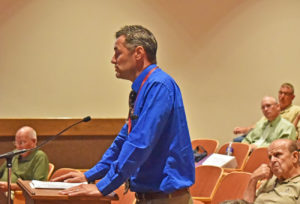 “And the fatalities will continue to happen,” Gielow said.

“There are other accidents from rear-ending. And I think not only a lowered speed is good but also to hopefully to put a turning lane in. I know this is a state road and your hands are tied. Please. I’m asking you, and I’ve emailed some of you to put in a TR9 form to request from the state to do a survey on this so in two years my daughters aren’t the ones dealing with a fatality or hitting someone else and then having to live with that tragedy.”

“What about River Road?” john Cunningham asks from the audience.

“Yeah it, is,” Cunningham replied.

In other news, Laurie Galbo asked the town attorney if there was any response from the town’s formal reply to the NYS Ag and Markets decision that Wheatfield’s ban on biosolids, which was upheld by state Judge Frank Caruso, was too restrictive regarding farming rights.

Galbo said she taking that as a good sign since the town had only 30 days to respond and it’s been three months since the filing deadline in June.