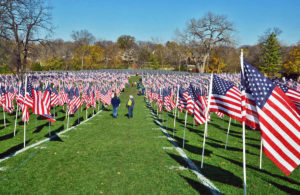 Three thousand American flags along the Niagara River will help remind citizens across Western New York that freedom — one of the things we can all agree on — comes with a cost.

The Erie-Niagara Sunrise Exchange Club working with Healing Fields, a national organization that helps organize these “pop-up” installations, is bringing one to Gratwick Park in North Tonawanda Sept. 9 through 11.

“On the 15th anniversary of the 2001 attacks, the magnitude of loss is revealed by this solemn formation of flags,” according to the flag foundation’s website. “Terrorists mistakenly believed that their heinous act would divide us when it actually brought us together. Posted in perfect rows and columns during the days surrounding Patriot Day in 2016, the Stars and Stripes will fly in tribute to the victims of 9/11. The scene of red, white and blue flags flying against a blue sky presents an inspiring and memorable panorama that will draw the Buffalo-Niagara Falls Metropolitan community together.”

The flags are 3’x5′ and each stands on an eight-foot pole.

Patriot Day is observed as the National Day of Service and Remembrance, occurs on Sept. 11 of each year in memory of the 2,977 people killed in the 2001 attacks. 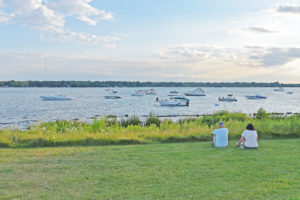 Gratwick Park along the Niagara River during a “Rockin’ on the River” concert in 2015.

5:50 p.m. Bagpipes; Daniel Hudson will play one song before the welcome.

Posted In
events, Events, North Tonawanda
Tags
About The Author