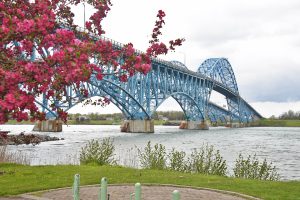 Don’t think of them as bridges. Think of it as just another part of the I-190. How else are you going to get from Buffalo to Niagara Falls relatively quickly without driving through residential areas?

If the effort to remove the Grand Island tolls stumbles yet again, it might be because the proposed law doesn’t accurately describe what the tolls inflict on the Buffalo-Niagara region.

Traveling from Buffalo to Niagara Falls using the I-190 there is simply no other reasonable way to get from there to here without crossing Grand Island.

The vast majority of motorists traversing either of the Grand Island bridges are not doing so to get onto the Island.

They’re using the bridges to get to the northern part of Niagara County, or Canada, or specifically, Niagara Falls, a place that sees 8 million visitors per year and is no doubt on track to experience the same kind of renaissance that Buffalo currently is.

How long that track is depends entirely on issues like this one, which is how the tolls are literally a barrier to the efficient interchange between two potentially great cities, creating traffic jams seemingly at any time of the day and creating a general dread and aversion to making use of the bridges.

But for some reason, the language of the bill focuses on the plight of the Islanders.

“The Grand Island Bridges are the only way to travel on to and off of Grand Island,” reads the first line of the “justification” section of the proposed law.

It continues: “This toll is an unjustified tax on residents of Grand Island, who have no other means by which to travel to and from their Grand Island homes.” 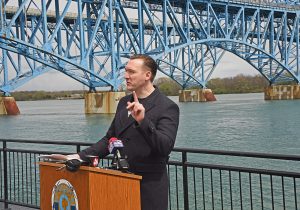 That is true, and naturally Islanders would benefit from the tolls being removed or even just replaced by an efficient electronic system that doesn’t require motorists to slow, stop and perform a George Washington hand-off.

But the real issue is that the I-190 crosses the Niagara River not once but twice. If the road was being managed properly by the state, that should be of no concern to motorists as most bridges in the state do not have tolls.

Think of it as simply an elevated highway and it becomes harder to fathom why a toll is being paid simply to continue on your way.

Nobody *needs* to go to Manhattan unless you work there. It’s not a pass-through; it’s entirely elective.

But here, we’ve been paying for the Grand Island bridges since 1935. And according to the original legislation, the tolls were to be eliminated when they were paid off. Considering, the bridges bring in $18-million a year, that had to be some time ago.

And to get from Buffalo to Niagara Falls and vice versa, you *need* to go across Grand Island.

But thanks to nefarious lawmakers during the ‘90s, this region was sold out to the Thruway Authority, giving them indefinite control to toll as part of the “Thruway 2000” legislation that passed.

Well, not indefinitely if this latest “remove the tolls” legislation gets passed by both houses and signed by Governor.

Control of the bridges would go to the State Department of Transportation, which does not charge for the bridges it maintains.

And continually paying for a paid-off bridge that’s really just a cash cow for the Thruway Authority exercising poor oversight by allowing untold traffic tie-ups at the bridges season after season is not fair or just or even smart.